The Truman Club’s next lunch is Thursday, November 17th at The Sterling Hotel, 13th & H Streets at 11:30 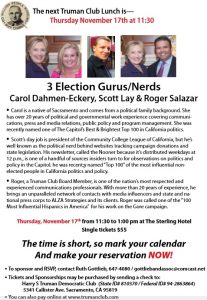 Carol is a native of Sacramento and comes from a political family background. She
has over 20 years of political and governmental work experience covering communications, press and media relations, public policy and program management. She was recently named one of The Capitol’s Best & Brightest Top 100 in California politics.

Scott’s day job is president of the Community College League of California, but he’s
well known as the political nerd behind websites tracking campaign donations and
state legislation. His newsletter, called the Nooner because it’s distributed weekdays at 12 p.m., is one of a handful of sources insiders turn to for observations on politics and policy in the Capitol. he was recently named “Top 100” of the most influential nonelected people in California politics and policy.

Roger, a Truman Club Board Member, is one of the nation’s most respected and
experienced communications professionals. With more than 20 years of experience, he brings an unparalleled network of contacts with media influencers and state and national
press corps to ALZA Strategies and its clients. Roger was called one of the “100
Most Influential Hispanics in America” for his work on the Gore campaign.

RSVP to Ruth Gottlieb at 647-4080 or gottliebandassoc@comcast.net (so we can order enough lunches. And let Ruth know if you CAN’T attend (we have to pay for every unused lunch).